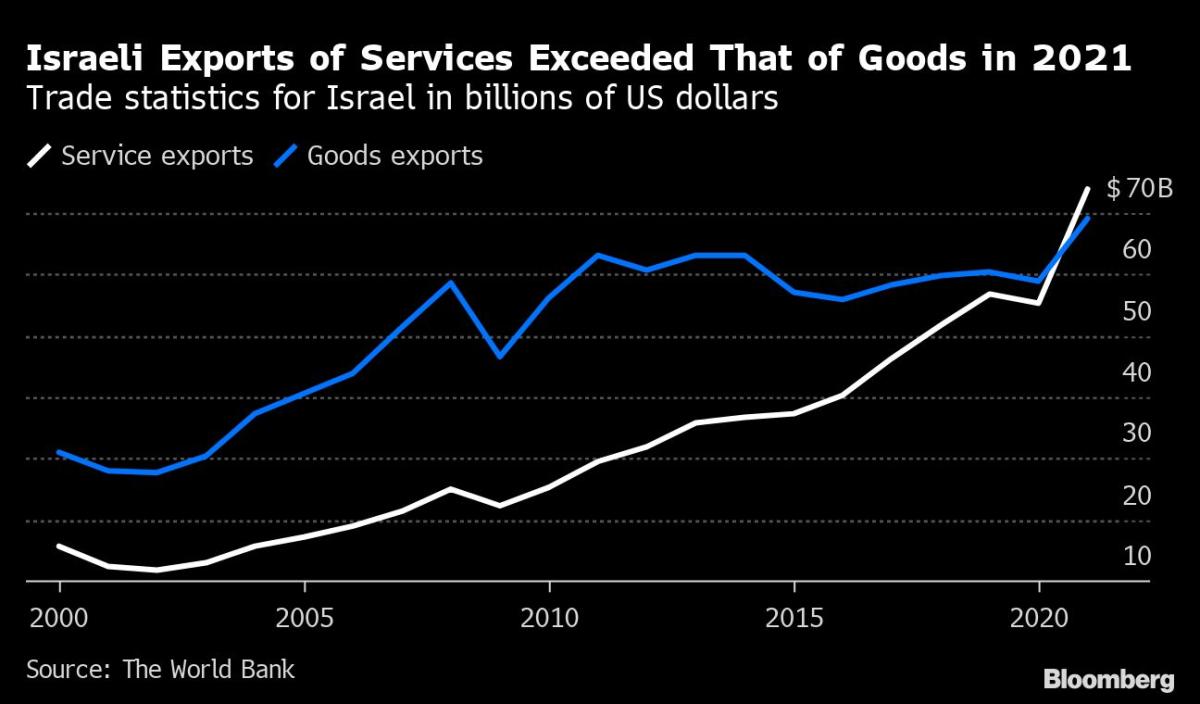 Just over a year into her job as Israel’s economy minister, Orna Barbivay’s ambition collides with political reality.

Strong coalition governments have given many of its predecessors little time to leave their mark. But two months after the election — Israel’s fifth vote since 2019 — the demands of the job are clear to her. Israel must abandon its founders’ protectionism and close the gap between its turbo technology industry and the rest of its economy.

For Barbivay, 60, politics is the second profession in which she has broken the barriers of Israel’s male-dominated workforce. She was the first woman to attain the rank of Major General in the military and is now the first to become Minister of the Economy.

Whether the political cards turn in her favor or not after the November election, the job means she’s in charge of an economy riven by inequality and huge amounts of wealth flowing into the vaunted tech sector. The difference between the tech and non-tech sectors is so great that Barbivay says she’s dealing with “two economies.”

“For years in the military I saw the challenge through the eyes of security and today I see how much the economy is a bridge to plug other gaps,” she said in an interview. “My job is to narrow the gap.”

The ministerial post, which oversees commerce, industry and labor, is the second highest economic role in government, and is the culmination of a career for Barbivay that spanned more than three decades in the military.

While an unprecedented diplomatic thaw with Arab countries has kept her in the spotlight by signing trade deals with former enemies, the focus is shifting home, with Israel’s high cost of living topping voters’ list of concerns at a time when inflation is rising. around the fastest since 2008 .

During her time as economy minister, she has helped ease import regulations, cut customs fees and reduce bureaucracy, with the aim of increasing competition and ultimately lowering prices. These efforts aroused the interest of international chains, including grocer Carrefour SA.

As part of a government currently led by Yair Lapid of the Yesh Atid party, she also abolished separate Israeli standards for foreign products, a major change in protectionist rules introduced with the creation of the state in 1948, which contributed to goods becoming more expensive.

“When I analyzed the economy, I saw that there were built-in obstacles,” Barbivay said. “We were a young nation and because of the desire to protect the domestic industry, they put in a lot of regulations.”

Barbivay was born in the mixed Arab-Jewish city of Ramla to a mother from Iraq and a father from Romania. He grew up poor in Afula, a northern town that was once home to three large transit camps for newcomers. Since then, there have been waves of immigrants from Ethiopia and former Soviet republics. As economy minister, she calls it an “existential need” to better prepare the less affluent segments of the population – including Arab women and Orthodox Jewish men – for the workforce, and bring jobs and investment to where they live.

“Looking at the two economies, I see the job of the Minister of Economy to increase productivity and kick-start the growth engine,” she said. “We have to set goals. We have to go to the periphery.”

In the military, Barbivay headed the personnel directorate and was the first female member of the military’s decision-making central staff. After entering politics in 2019, she joined Lapid’s centrist party and became economics minister in June 2021, one of a record number of women in Israel’s newest cabinet.

Barbivay, who understands Arabic, has been one of the public faces of his aid to the Arab world, which is changing Israel’s position in the region both diplomatically and financially. Milestone is establishing cemented relationships with governments including Bahrain and Morocco. In May, she traveled to Dubai to sign a free trade agreement with the UAE, less than two years after a political breakthrough between the two countries.

Ties with Turkey, once a firm ally in the region, have also been restored. Regional heavyweight Saudi Arabia is showing no interest in establishing formal relations yet, but Barbivay says he is hopeful that President Joe Biden’s recent visit to the kingdom will help open that door. “Everything in due time,” she said. “I hope it will be diplomatic ties.”

At home, the economy continues to reflect the wide disparities. Poverty is rife among Arab citizens and ultra-Orthodox Jews, making Israel one of the world’s most unequal high-income countries.

The gap is comparable to levels in the US, according to the Paris-based Global Inequality Lab, a group founded by French economist Thomas Piketty. The findings showed that the bottom half of the Israeli population earns 13% of the total national income, while the share of the top 10% is 49%.

Over the past three decades, inequality in Israel has remained high, even though it has declined since 2012. But now the part of the economy that employs most of the workforce is increasingly lagging behind the technology sector in wages and productivity.

But Israel’s politics may prove to be a challenge it cannot overcome.

She is number two on Lapid’s list — the second-largest after former Prime Minister Benjamin Netanyahu’s Likud — and may be demoted in November.

Yesh Atid is lagging behind Likud in the polls and behind Netanyahu in potential coalition building. There is also the possibility of a unity government of the largest parties, which can leave her where she is.

“If political instability continues, it will hurt everyone — citizens, Israel’s international image, the government’s ability to implement programs,” Barbivay said. “But if there is stability in government, the sky is the limit.”