Aucklanders are being told to prepare for traffic disruption in the central city as another protest gets underway.

The Freedom and Rights Coalition protests in Auckland Domain on August 6, 2022.
Photo: Screenshot

Police oversee the Auckland Domain, where the Brian Tamaki-led Freedom and Rights Coalition gathers for what it calls a “Kiwi Patriots Day and March.”

There is also a group that opposes the coalition.

Ahead of today’s protest, Waka Kotahi has closed both the Khyber Pass slip roads – which were used by the protesters last time – and the Symonds St slip roads.

A police spokesman has confirmed that the highway ramps have been closed in connection with the protest activities at Auckland Domain.

“We are working together with Waka Kotahi for this, who has closed the on and off ramps to keep disruption to a minimum.”

“Police are asking the community to be patient on the roads as we expect there could be some traffic delays and disruptions, especially near the preserve and surrounding areas.”

The public is asked to report any behavior to the police by calling 105.

“Police recognize the public’s right to protest peacefully and lawfully, but we will take action where necessary.”

The Freedom and Rights Coalition protests in Auckland Domain on August 6, 2022.
Photo: Screenshot 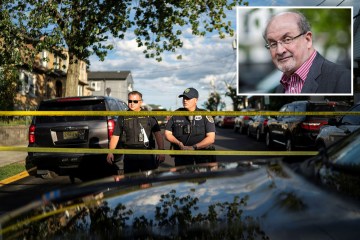 The New Zealand Times - August 13, 2022 0
A HAVEN witness who saw Salman stabbed Rushdie repeatedly at an event in New York has revealed shocking new details about the brutal attack....