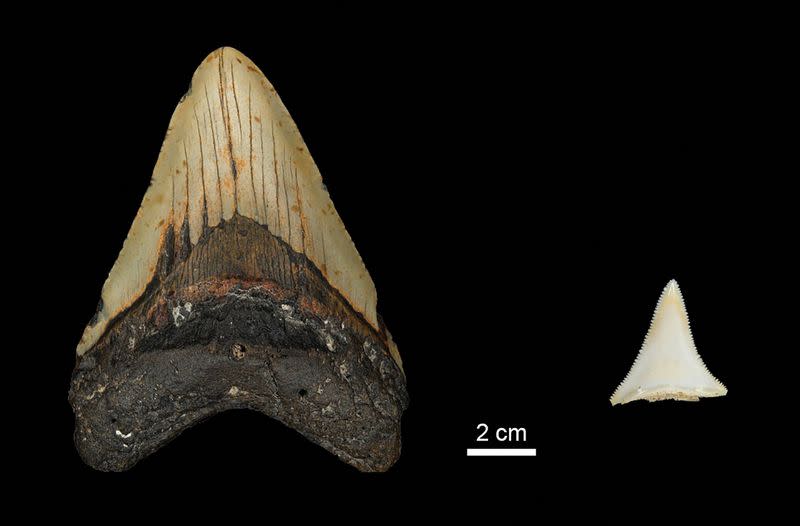 WASHINGTON (Reuters) – An examination of the zinc content of the teeth of living and extinct sharks provides clues to the disappearance of the largest known shark, indicating that the mighty megalodon may have been surpassed by the great white shark in the seas. old .

The researchers evaluated the ratio of two forms of the mineral zinc in an enamel-like material called enameloid that comprises the outer part of shark teeth. This report allowed them to infer the diet of sharks and assess their position in the marine food web.

They found that while the megalodon may have been alone at the top of the food chain for millions of years, the arrival of the great white shark around 5.3 million years ago added another top predator. hunting similar prey.

This contest for food resources featured two animals now housed in the popular imagination – with the great white featured in the hit 1975 film ‘Jaws’ and its sequels and the megalodon in the popular 2018 film ‘The Meg’ .

The megalodon, whose scientific name is Otodus megalodon, appeared about 15 million years ago and died out about 3.6 million years ago. It was one of the largest predators in Earth’s history, reaching at least 50 feet (15 meters) and possibly 65 feet (20 meters) in length while feeding on marine mammals, including the whales.

The great white shark, Carcharodon carcharias, reaches at least 20 feet (6 meters) long and may have been the more agile of the two.

“Megalodon co-existed with the great white shark during the time period called the early Pliocene, and our zinc data suggest that they appear to have indeed occupied the same position in the food web,” said paleobiologist Kenshu Shimada. from DePaul University in Chicago. , co-author of the study published Tuesday in the journal Nature Communications https://www.nature.com/articles/s41467-022-30528-9.

“There have been several hypotheses as to why megalodon became extinct. Traditional hypotheses have attributed this to climate change and declining food sources. However, a recently proposed hypothesis holds that megalodon lost competition with the newly evolved great white shark. Our novel seems to support this proposition. It’s also entirely possible that a combination of several factors could have been at play,” Shimada said.

The researchers said the great white was not believed to actually hunt its larger cousin.

The study looked at the teeth of 20 living shark species and 13 fossil species, signaling their position in the food chain.

“At the bottom of the food chain are our ‘primary producers’, which are photosynthetic organisms like phytoplankton that convert solar energy into food. At the top of the food chain are apex predators like great white sharks, which have no predators except humans, while in between we have herbivores, omnivores and lower level carnivores,” said study co-author Michael Griffiths, geochemist and paleoclimatologist at William Paterson University in New Jersey.

The study indicated that Carcharodon hastalis, thought to be a direct ancestor of the great white, was not positioned as high up the food chain, likely feeding on fish rather than marine mammals.

For a creature that has played a vital role in marine ecosystems for millions of years, much remains mysterious about the megalodon. Because shark skeletons are cartilaginous rather than bony, they don’t lend themselves well to fossilization, making it difficult to know precisely what megalodon looked like. However, countless megalodon tooth fossils have been found around the world.

“Megalodon is usually portrayed as a monstrous, large shark in novels and movies, but the reality is that we still know very little about this extinct shark,” Shimada said.

(Reporting by Will Dunham, editing by Rosalba O’Brien)