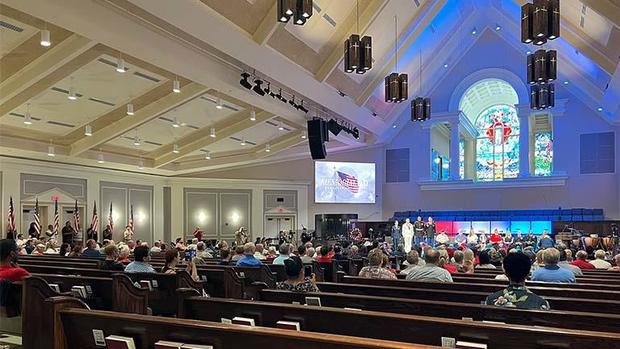 PLANO, Texas (TNZT) — More than 200 people gathered in Plano to honor veterans who made the ultimate sacrifice.

“We are thinking and thinking of all the veterans who never came home,” said Fletcher Sharp, of American Legion Post 321.

For some, the ceremony brought them to tears.

“It warms my heart, really,” said Don Mellor, who served in the Air Force. “It means a lot.”

The ceremony is usually held at Plano Veterans Memorial Park, but due to construction, it was held at Hunters Glen Baptist Church instead.

“It’s a lot of hard work and dedication for a group of people. They’ve done a great job of organizing and the people who show up here every year are wonderful,” Mellor said.

Organizers said they will never forget all those killed in action, including the 42 Plano natives whose names are listed at Memorial Park.

A bell rang as they read each name on this list. There were also 42 flags raised to honor each Plano native.

They also took time to celebrate those who served in all branches of the military present.

“I was in the Air Force in the ’60s and my grandson is a Marine today,” Mellor said.

At the end of the day, there’s one thing everyone should remember, Sharp said.

“Freedom is not free; there is a price to pay for the freedoms we all enjoy today.”

Alexis Wainwright is an Emmy Award-winning journalist. Prior to moving to the Lone Star State, she was a reporter and performed anchor duties at KARK in Little Rock, AR.