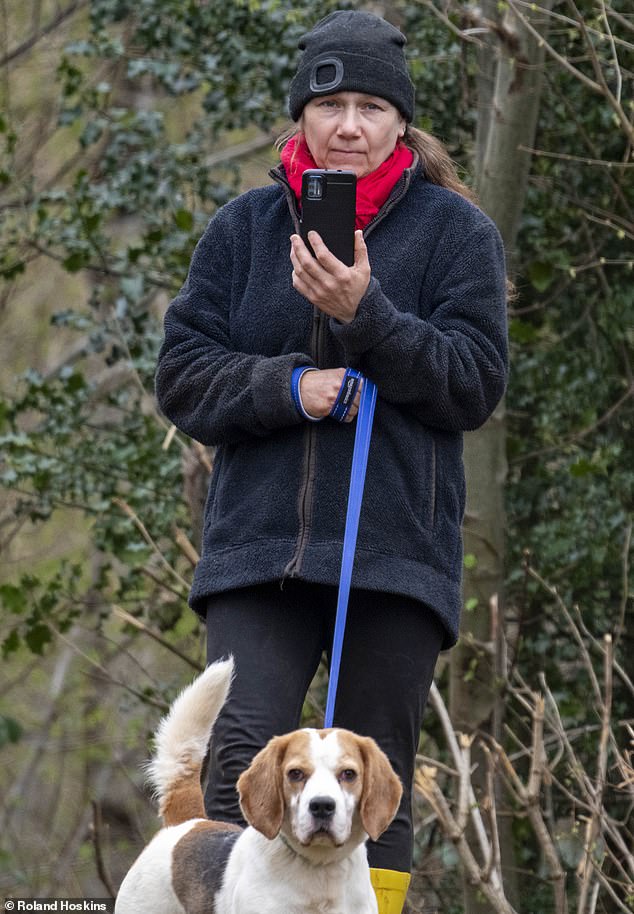 The partner of a notorious British fraudster who was featured in a Netflix documentary before allegedly trying to kill a police officer, today helped agents trying to track him down.

Sandra Clifton, 49, of Wokingham in Berkshire, is said to have been ‘under the control’ of ‘Puppet Master’ Robert Hendy-Freegard, 51, for the past decade.

Netflix released the documentary series The Puppet Master: Hunting the Ultimate Conman in January, based on Hendy-Freegard’s deceptions.

But on Saturday, Ms Clifton was interviewed by officers as a manhunt for him was underway near their isolated mansion in Vidaillat, east of Clermont-Ferrand in central France.

Sandra Clifton, 49, of Wokingham in Berkshire, is said to have been ‘under the control’ of ‘Puppet Master’ Robert Hendy-Freegard, 51, for the past decade. She is now helping police track him down after he reportedly tried to kill two police officers on Thursday to kill

Hendy-Freegard was said to have been ‘deliberately hit by a car’ on Thursday and injured two police officers with his Audi A3 before fleeing, according to a local judicial source.

One officer suffered facial injuries, including “multiple fractures,” while the other suffered more minor injuries.

“The search for the suspect, who is wanted for the attempted murder of a public servant, continues,” the source said.

“Two helicopters are involved in the search, along with all available gendarmes. The suspect’s partner is at large and is assisting officers.’

He is now charged with the attempted murder of a government official, which carries a maximum sentence of 30 years in prison. 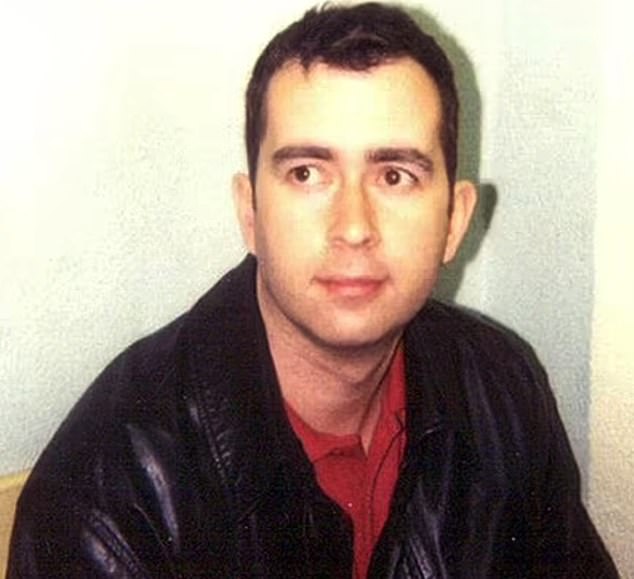 Scam artist Robert Hendy-Freegard, 51, (pictured) reportedly ran his Audi A3 into police officers while escaping from his hideout in the rural village of Vidaillat in the sparsely populated Creuse region of central France 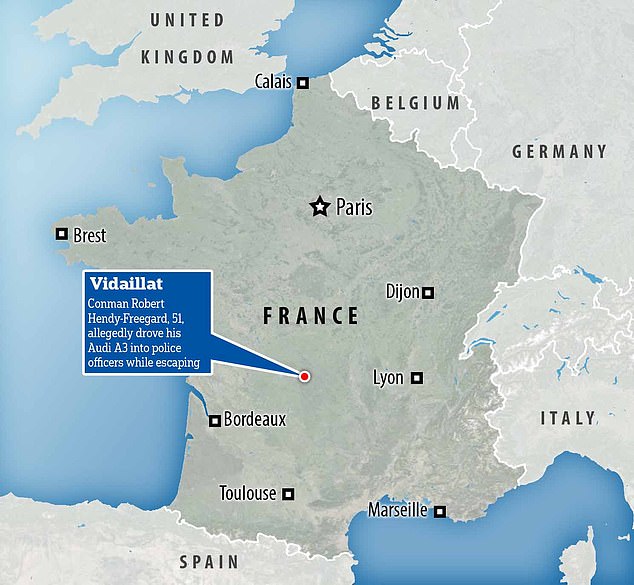 Hendy-Freegard, nicknamed ‘The Puppet Master’ for the control he exercised over his victims, was sentenced to life in prison in the United Kingdom in 2005 for kidnapping by fraud, theft and obtaining money through fraud.

According to court evidence, he convinced seven women and a man that he was an MI5 agent protecting them from the IRA and forced them to hand over up to £1 million in cash.

Hendy-Freegard’s kidnapping convictions were later quashed and he was released from prison in 2009.

He met Mrs. Clifton, a dog breeder in 2012, through a dating app, and the pair kept 26 Beagles at their home in Vidallat.

Hendy-Freegard bought her and her family a flashy car for a vacation to Spain, and told her he worked in ‘the advertising space’. 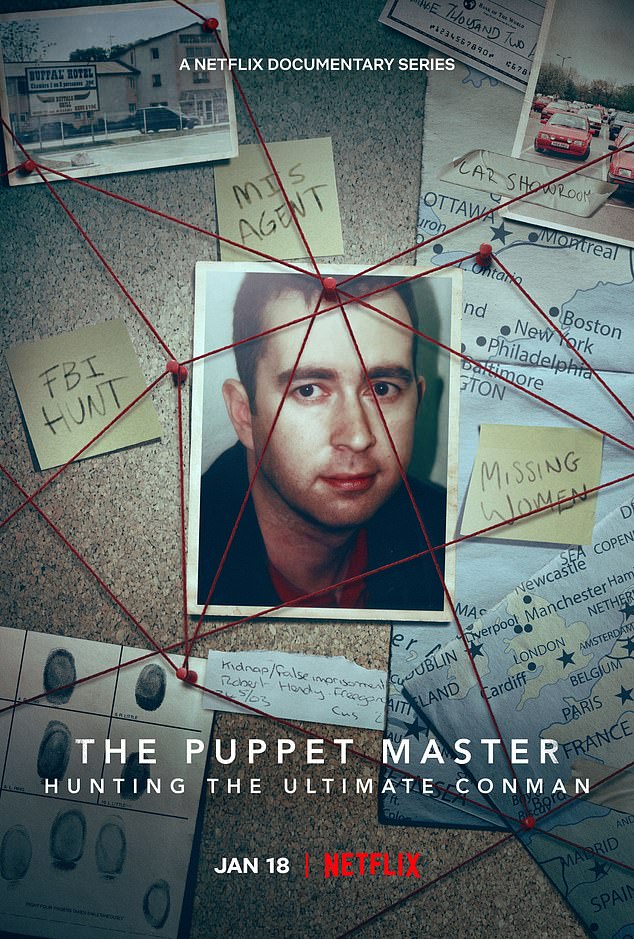 Hendy-Freegard was the subject of the hit Netflix documentary series ‘The Puppet Master: Hunting the Ultimate Conman’

After they met, he started pretending to be a dog breeder.

Showing off his Beagles at the Crufts dog show, he called himself “David Clifton,” but dropped out in 2015 when his true identity became known.

Mrs. Clifton’s children from a previous relationship – Jake, 25, and Sophie, 28 – claim that Hendy-Freegard convinced their mother that he is a secret agent and is controlling her.

But according to judicial sources, he denies the allegations.

The kids told the Netflix documentary The Puppet Master: Hunting The Ultimate Conman that they hadn’t seen their mother since 2014 when she disappeared after meeting him.

The once devoted mother’s relationship with her children broke down after Hendy-Freegard suggested that Jake, then 16, was gay and stole jewelry and locked him out of the house.

The siblings researched ‘David Clifton’, discovered that his real name was Hendy-Freegard and believe he ‘brainwashed’ their mother.

But when police tracked down Ms. Clifton and let her know who she was with, she initially turned down the investigations.

Sandra disappeared from family life for seven years and did not even attend her parents’ funeral, despite being “dearly loved” and an only child.

Neighbors in France thought something was wrong, as Ms Clifton had no ID, no car, lived in the middle of nowhere and was only visited by a man with dark hair.

If anyone tried to speak to her, she would immediately call Hendy-Freegard and ask him what to do.

“She never went out except in her little courtyard,” a neighbor named Serge told TNZT, who declined to give his last name.

“She spoke no French and made no attempt to associate with anyone,” said one, asking not to be identified.

“It was pretty clear that she was only interested in interacting with her partner – someone many of us recognized from Netflix.”

Meanwhile, Jake tried last year to protect for her the house his mother inherited from her parents by giving it into safekeeping.

Sandra challenged the attempt and the two faced court for the first time in years.

She accused Jake of trying to steal from her. He said: ‘The problem is that my mother is trained and supervised to do what Freegard wants her to say and do.

“When the police found her to tell her we wanted to hear from her and to tell her who she was with, she said, ‘I don’t care. I know who I’m with.’

The semi-detached house that the couple share was raided by police and animal protection on Friday and the Beagles were taken care of. 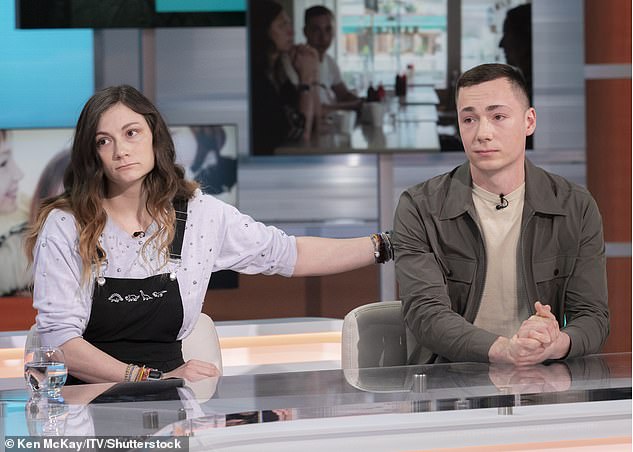 Her devastated son and daughter – Sophie, 28, and 25-year-old Jake, who appear in the Netflix documentary – suspect their mother is being forcibly controlled by Hendy-Freegard

Robert Hendy-Freegard is said to use the identities David Hendy and David Clifton as he travels around Europe.

Hendy-Freegard, a notorious con man, convinced a string of highly respectable victims that he was an undercover MI5 agent and they were IRA targets because they knew him.

Some of his victims lived in hiding for years. In the end they all gave him money – £1 million which he spent on making his James Bond fantasy come true of fast cars, luxury holidays and expensive clothes.

As he gained confidence, Hendy-Freegard monitored up to five victims at a time, keeping them in various “safe houses” across the country, and using a mix of charm and menace to keep them under his spell.

His crimes always started the same way. He met victims on social occasions or as a customer at the bar or car dealership where he worked. 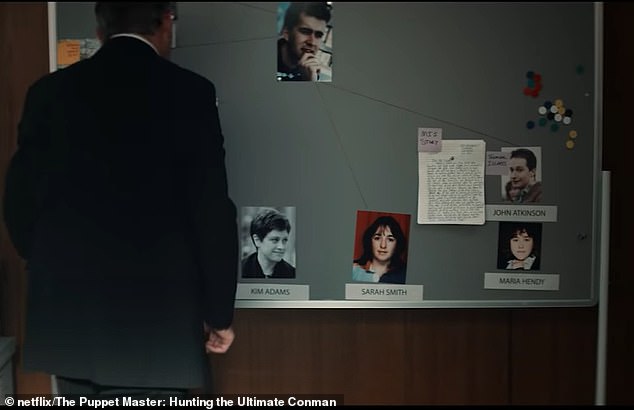 Police said anyone who sees Hendy-Freegard should call authorities immediately. Pictured: Detectives assemble their investigation into Hendy-Freegard in Netflix documentary ‘The Puppet Master’

He would later reveal his ‘role’ as an undercover agent for MI5, Special Branch of Scotland Yard working against the IRA.

He would win them over, ask for money and make sure they do his bidding.

He then demanded that they cut off contact with family and friends, undergo “loyalty tests” and live alone in poor conditions.

All had to perform bizarre tasks that he said were “tests” set up by their so-called “spymasters.”

He claimed he was going to marry his female victims, who often refused to cooperate with the police because he had warned them that the police would be double agents or MI5 agents who would conduct another ‘loyalty test’.

Sandra’s situation bears a chilling resemblance to that of Hendy-Freegard’s previous victims—particularly Sarah Smith, who went missing for ten years after convincing her that he was an undercover cop working for the government.

Once he brainwashed her, separated her from her family, wiped out her identity and became her sole protector, she was completely at his mercy. She also handed over her savings of £180,000.

Police said anyone who sees him should immediately call authorities. 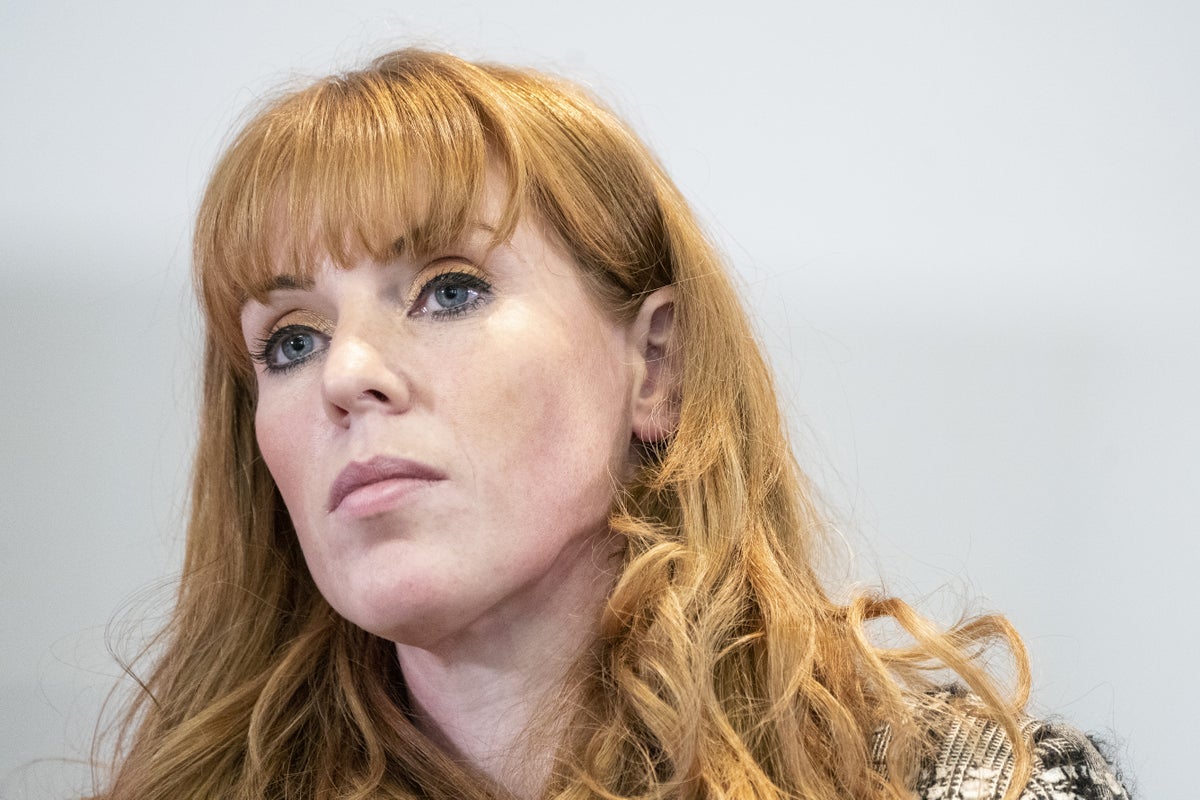