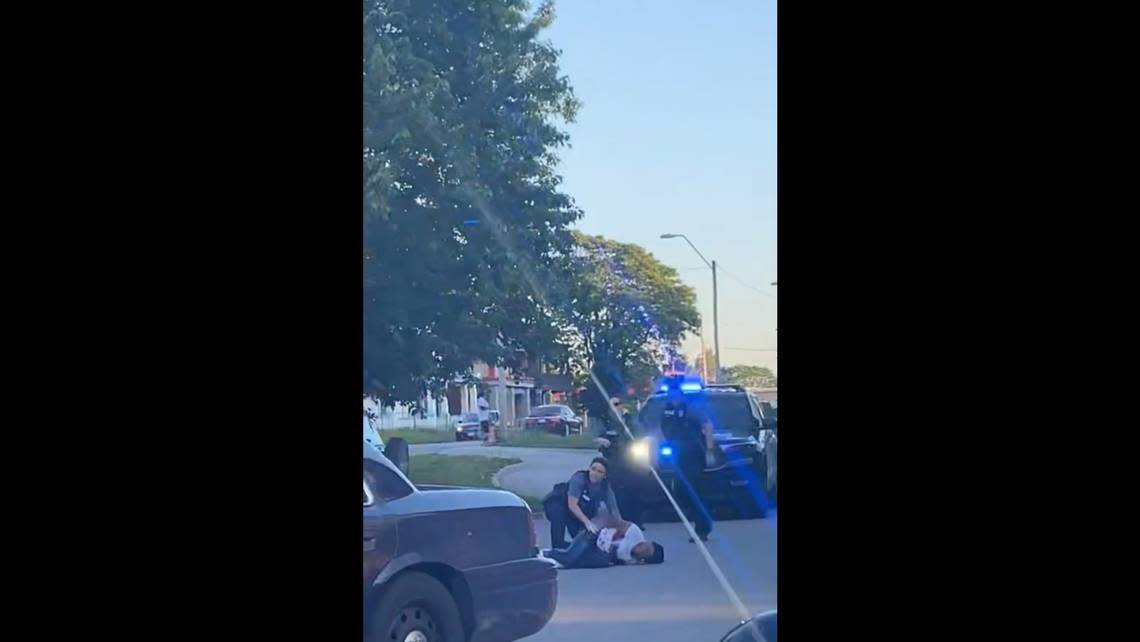 In the days after Kansas City police shot and injured a woman on Friday while investigating a suspected carjacking, conflicting reports surfaced as to whether or not she was armed. .

Questions about what exactly happened could be answered by video from the officers’ body cameras and the vehicle’s dashboard cameras.

But police said this week the video is unlikely to be made public anytime soon.

The Star asked both the Kansas City Police Department and the Missouri Highway Patrol, which is investigating the KCPD shootings, if video from the officers’ body cameras would be released for transparency purposes.

Both refused. For its part, the police department has designated the highway patrol as the agency responsible for this file.

“Any video or additional information in the ongoing investigation can only be released by the MSHP (highway patrol), this is the agency conducting the investigation,” the sergeant said. Jake Becchina, a Kansas City Police Department spokesman, said in an email.

Highway Patrol said no video will be released until the investigation is complete. Police investigations into the shootings often take several months.

“We will not release video or other details while this is an ongoing investigation,” said Sgt. Andy Bell, spokesman for the Missouri Highway Patrol’s A Troop in the Kansas City area.

“After the report is submitted to the prosecutor, they will decide what will or will not be made public.”

Under the Kansas City Police Department’s Digital Media Policy, the release of body camera video is subject to the Missouri Sunshine Law.

Missouri law states that video recordings and investigative reports from all law enforcement agencies are closed records until the investigation becomes inactive.

The patrol was not releasing information about the location of the victim’s injuries, Bell said. He was investigating whether a single handgun was found at the scene and examining body cameras that should respond if the victim had their hands up, as a witness said.

The Highway Patrol has been the lead investigative agency for police shootings in Kansas City since June 2020. Until then, the police department was investigating its own shootings, a practice criticized by some community leaders.

Kansas City officers shot and seriously injured the woman Friday night in the parking lot of a Family Dollar store near Sixth Street and Prospect Avenue.

The shooting occurred as officers attempted to arrest him and a man in connection with a suspected carjacking in Kansas City, Kansas.

As officers approached the vehicle, the man exited the driver’s side and began to drive away, Bell said Friday. As officers began chasing after him, the woman exited the passenger side. Both officers shot the woman as she fled into the parking lot.

A handgun was found at the scene, according to highway patrol.

“We are not going to comment on the exact footage of an encounter with an alleged armed suspect,” Bell said Friday, adding, “Everything will be analyzed and reviewed by our investigators as it always is.”

A witness, who shot video of the aftermath, told The Star the woman had her hands up and tried to flee from officers moments before she was shot multiple times in the parking lot.

Shedanja, who declined to give her last name, said she heard police officers shouting “Get out of the car” at two people in the car next to hers.

A man got out, jumped a fence and ran away. Three officers chased him, she said.

The woman came out with her hands in the air, Shedanja said. When officers told her to get down, the woman replied that she couldn’t because she was pregnant.

The woman told officers there was a gun in the vehicle, then began to back up towards a fence in the parking lot. Several officers approached her with their weapons drawn.

The woman ran three paces from the officers and they fired five times, Shedanja told the Star.

The Star’s Aarón Torres and Bill Lukitsch provided information for this story.