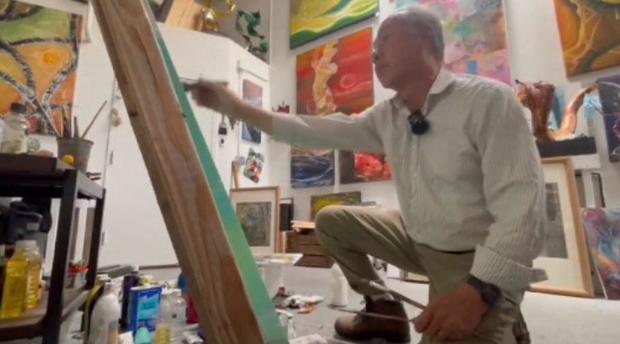 Dao has been a landscaper for nearly 40 years. Now work has become second nature.

“I work with my hands, but my mind also works,” Dao said.

Images from the front lines in Ukraine evoke anger, despair and disgust. The only thing Dao refuses to feel is helplessness.

After a day’s work, the 68-year-old puts down the leaf blower and picks up his most powerful weapon in the fight against dictators and authoritarian regimes: an artist’s brush. He often paints late at night.

“I think about everything I need to do, the good things I need to do,” Dao said. “And I hope people think like that, and do like that.”

Dao escaped communist Vietnam by cramming into a boat with his family in the mid-1980s. They spent nearly a month adrift in the ocean with little food and water. He resettled in America with nothing, but found a way to send four children to college.
As a war refugee himself, the bond with Ukrainians is strong.

“They lost everything. They lost parents, brothers, sisters, family,” Dao said. “I feel very hurt. Ukrainians look like us.”

So, after half a century of work, Dao curates what is perhaps one of the most important art exhibitions of his not-so-secret life.

“I know what I’m doing is very small, but I want to put my hand in it to help people,” he said.

Proceeds from this painting, along with 20% of total sales, will be donated to a non-profit organization, Nova Ukraine.

Dao’s experience makes him a believer that one person can make a difference in the world.

“If everyone does good things together, everything will change,” he said. “Life will be better for the future.”