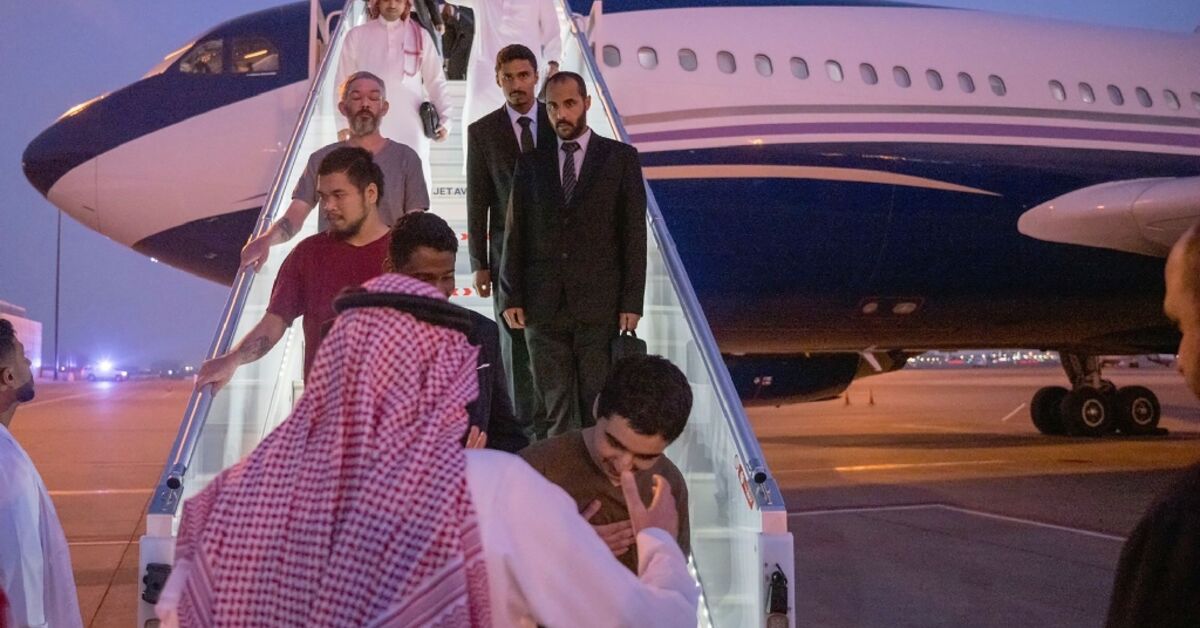 Ukraine on Wednesday announced the exchange of a record 215 captured soldiers with Russia, including fighters who led the defense of the Azovstal steel plant in Mariupol, which became an icon of the Ukrainian resistance.

The exchange was the largest exchange between the warring factions since the beginning of the Russian invasion in February.

Ten prisoners of war from the United States and Britain, among others, were transferred to Saudi Arabia earlier on Wednesday as part of the exchange between Moscow and Kiev, Zelensky said.

Zelensky said five military commanders, including leaders of the defense of Azovstal, were brought to Turkey as part of an operation prepared well in advance and agreed with Turkish President Recep Tayyip Erdogan.

The released prisoners will remain in Turkey “in total security and in comfortable conditions” until the end of the war, Zelensky added.

The Ukrainian armed forces’ long-standing refusal to surrender at Azovstal, despite shortages of ammunition and supplies, has earned them praise across the country for their heroism in defying overwhelming odds against Russia’s superior numbers and firepower.

The POWs transferred to Saudi Arabia included five British nationals, two Americans and one from Morocco, Sweden and Croatia, according to a Saudi official briefed on the operation.

A Saudi statement said they had arrived in the kingdom from Russia and that the Saudi authorities were “facilitating procedures for their safe return to their respective countries”.

British Prime Minister Liz Truss said on Twitter that the release of the British was “very welcome news… an end to months of uncertainty and suffering for them and their families”.

Truss said they had been “detained by Russian-backed proxies in eastern Ukraine,” and thanked Zelensky and Saudi Arabia for helping with the liberation.

MP Robert Jenrick on Twitter identified one of the British detainees as “my voter” Aiden Aslin, who was sentenced to death in June as an alleged mercenary after being captured by pro-Russian separatists.

Jenrick said the British detainees were “on their way back to the UK” and that Aslin’s family would “finally be at peace”.

“We look forward to reuniting our citizens with their families,” US National Security Adviser Jake Sullivan said in a statement on Twitter.

The Moroccan detainee is Brahim Saadoun, who was also sentenced to death in June by the unrecognized Donetsk People’s Republic, a Moroccan official at the embassy in Riyadh said.

Swedish Foreign Minister Ann Linde said on Twitter that the Swedish citizen, also detained in Donetsk, “has now been exchanged and is healthy”. She also thanked Ukraine and Saudi Arabia.

In Zagreb, the foreign ministry called the released Croat Vjekoslav Prebeg, who was detained in April, and said he would return on Thursday to thank Kiev and Riyadh.

The releases came after efforts by Prince Mohammed, the de facto ruler of Saudi Arabia, “to continue[his]commitment to humanitarian initiatives towards the Russo-Ukrainian crisis,” the Saudi statement said.

Video broadcasts from the official Saudi news agency show the 10 POWs being greeted by Saudi officials as they descend from a plane in Riyadh, then escorted into a room where they chat with diplomats from their respective embassies.

The war in Ukraine has fueled tensions between Saudi Arabia and the United States, a crucial ally for decades.

Saudi Arabia voted in favor of an early United Nations resolution to denounce the Russian invasion and demand that Moscow withdraw its troops.

However, the kingdom has largely resisted US pressure to ramp up oil production to alleviate the war-induced energy crisis — a campaign that included a visit by US President Joe Biden in July.

Instead, Riyadh has coordinated with the OPEC+ oil cartel it co-leads with Russia.